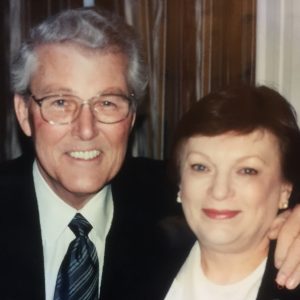 Photo of Richard Morel Clarke and his wife Jacquie (Eaton).

Richard (Dick) Clarke was born and raised in Toronto and graduated in Chemical Engineering from the University of Toronto in 1954. He earned a Masters in chemical engineering from Yale University and went on to have a distinguished career in manufacturing and the chemical industry in the United States and Canada. Richard served in executive positions in a number of public and private companies, becoming CEO of Celanese Canada based in Montreal. He returned to the US and continued to serve in senior executive and board roles. Richard was married to Jacqueline (Eaton) for over 60 years and has two daughters and three grandchildren. He currently lives in Connecticut. The Clarke Prize is a reflection of his confidence in the engineering profession’s ability and responsibility to benefit society and protect the environment, as well as his belief that character, leadership and teamwork are critical elements in engineering practice. The Prize is also a demonstration of Richard’s appreciation of his engineering education at the University of Toronto, and his upbringing in Canada.